Soda & Swine is a creative meatball eatery with lots of small to medium sized bites. We visited the Liberty Station location. It has a gold bar, old-fashioned looking baking area with pies on display, sunroofs adding lots of natural light, wood covered walls, a 20-foot foosball table that works as a community table, plenty of seating, and an outdoor patio with more seating.

You order your food upon entering Soda & Swine, then seat yourself and your food is brought to you. You can also order from their wide selection of sodas. On the other side of the registers are the pies, they have a couple different types of apple pies, seasonal treats and soft serve ice cream. The next stop is the bar, it is a full bar where you can order a cocktail, wine, beer (lots of local crafts), and if you are feeling funky, a champagne slushy.

We got some suggestions on what to order for lunch from the employee at the register. You can check out their menu here for yourself. Soda & Swine has several meatballs to choose from, such as, smoked pork, chorizo, chicken, beef and quinoa meatballs. You can order your meatball as a slider, submarine, spaghetti, or 3 meatballs in a skillet with sauce and cheese.  Once we picked our meatballs, we ordered some sides as well and set off for a table. The food started to arrive quickly, but not everything came out at once. We liked this system since we ordered a bunch of different items to give a try so it was like having appetizers, entrees and dessert. 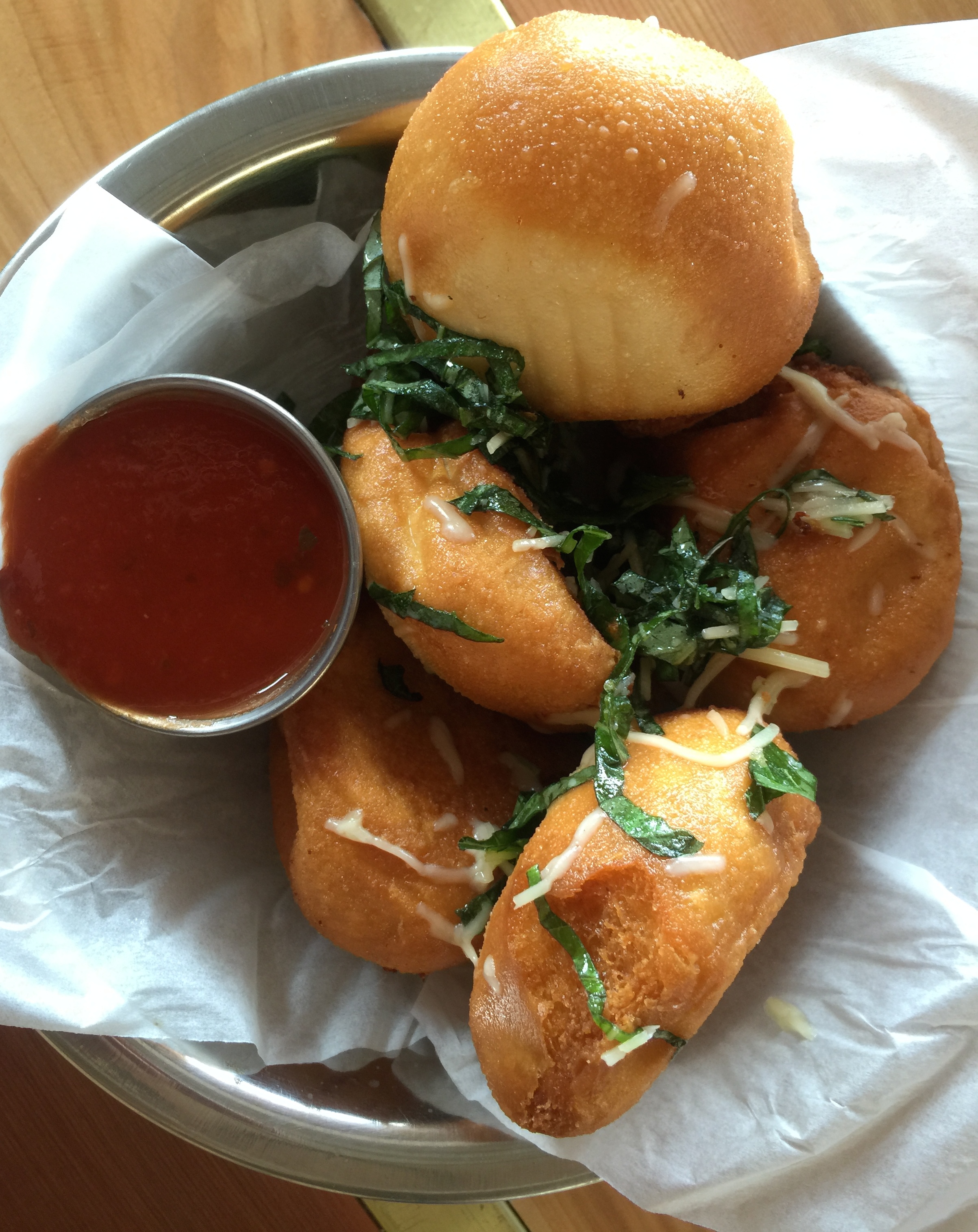 The pizza knots were gone in a flash. My pizza loving husband and son gobbled these up. They had a nice crisp from being fried and a chewy center. The marinara and fresh basil where a perfect touch to the fried dough. 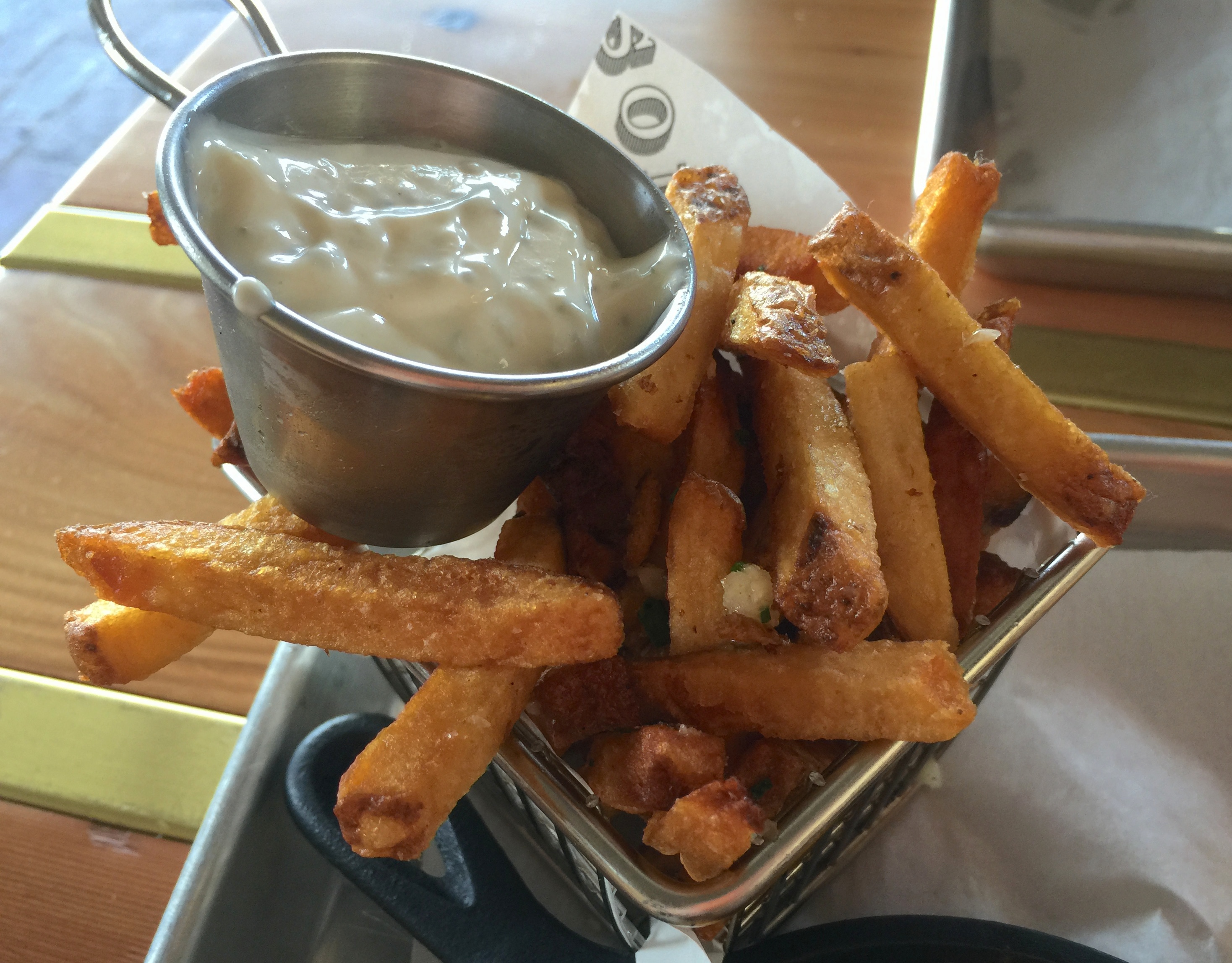 I was so tempted to order a second helping of the hand cut French fries, mainly for the malt vinegar aioli. It was tangy, salty and almost worth eating with a spoon. The fries had a good crisp to them. I had a difficult time sharing these babies! 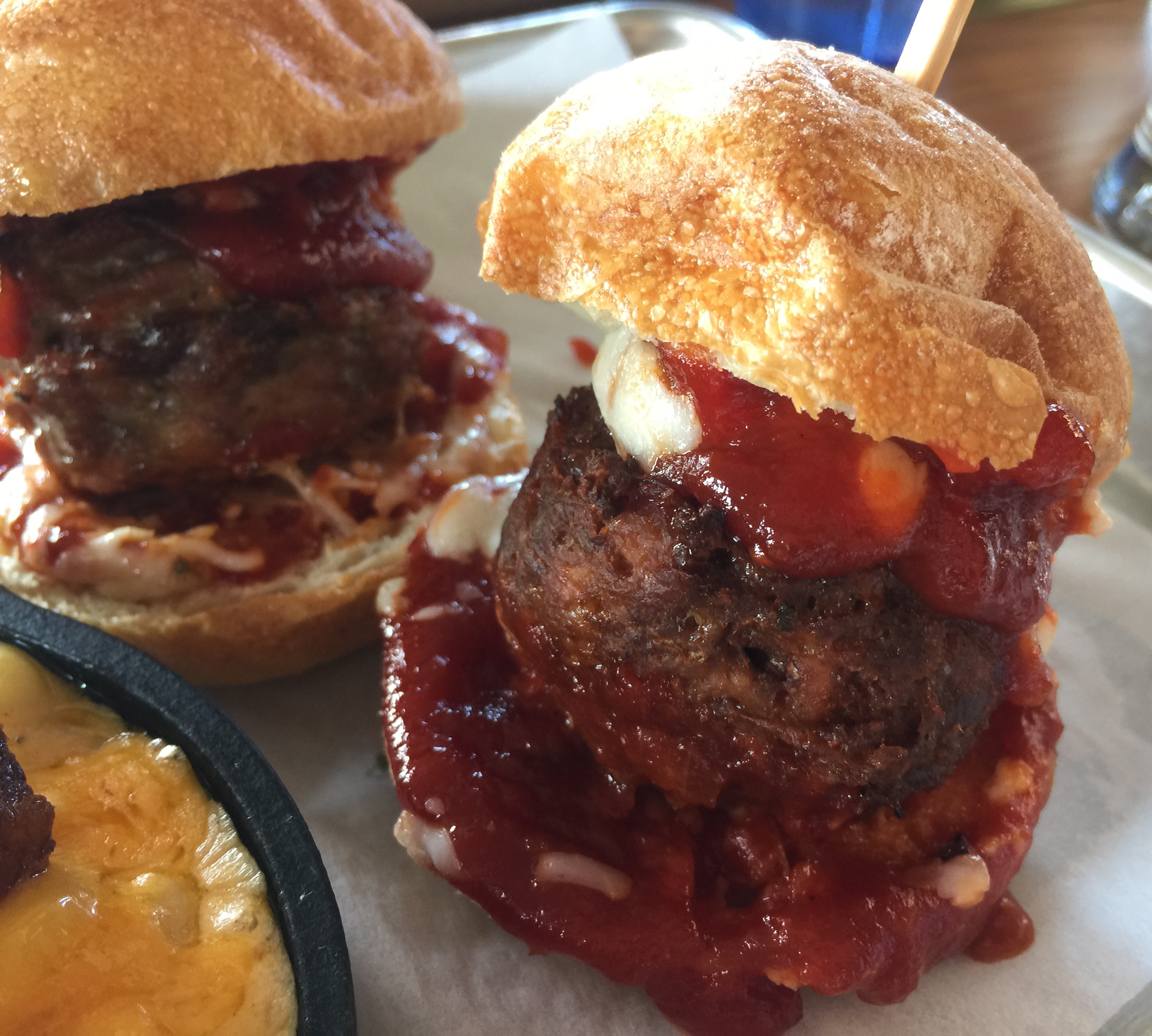 I ordered The Hog slider – chorizo with chipotle BBQ & mozzarella and The Swine – smoked pork with chipotle BBQ & pepperjack. My husband and son each had The Bovine – beef with marinara & mozzarella. Both of my sliders were fabulous, however, the chorizo slider was my definite favorite. I will order it again, plus try a couple other meatballs.

My son and I wanted to share the mac & cheese. When we ordered it, the employee helping us out asked if we wanted to add bacon bites to our mac & cheese. Always yes! The mac & cheese was made with aged cheddar and garnished with chives. I thought the presentation was really adorable, it was served in a mini cast-iron skillet to keep the mac hot and the cheese melty. Very tasty mac! Although, my son did not appreciate the bacon bites, which ultimately meant more for me. For the sake of sharing, I would probably order the dish next time without the bacon.

Once we were done with lunch we moved onto dessert. There was some confusion because we were told we could order dessert at our table, but when we attempted to, we were told we had to order dessert at the register. That may have been ironed out since then, but it really wasn’t a big deal. We all enjoy pie and soft serve ice cream so we were especially excited about trying Soda & Swine’s dessert. 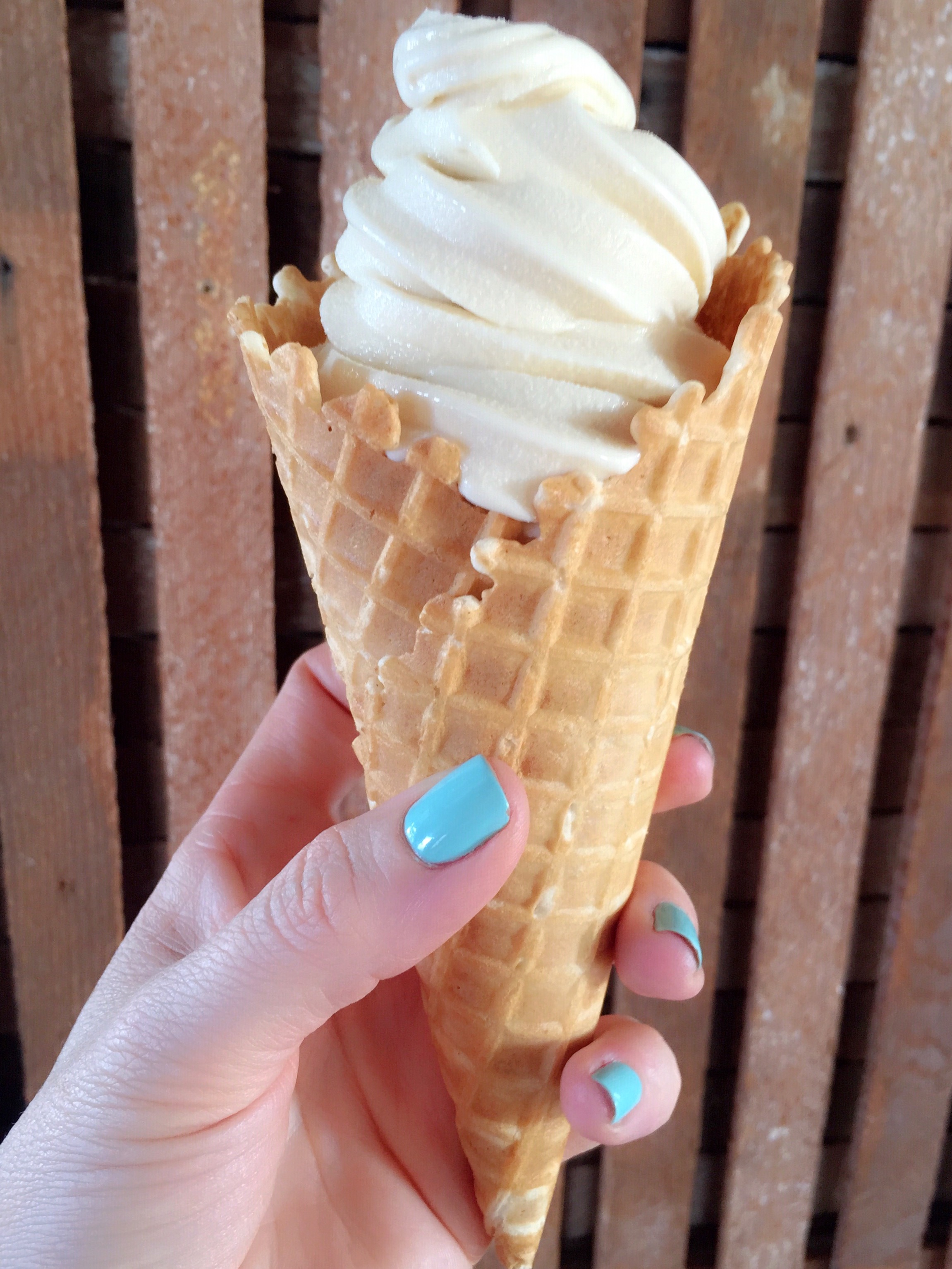 My son ordered a vanilla soft serve in a waffle cone. He let me steal a few bites and boy was it some delicious soft serve ice cream. Really creamy, smooth and the vanilla was a very pronounced flavor. I loved it, as did he.

My husband ordered a slice of classic apple pie a la mode. The pie came out with vanilla soft serve ice cream served on the side. We liked the side of soft serve since the apple pie had a crispy crust sprinkled with coarse sugar crystals, it prevented it from becoming soggy.

When we checked out the seasonal treats I saw Soda & Swine had a brownie parfait on that day’s dessert menu and the soft serve flavor was coffee. No brainer for me!

The brownie parfait with coffee soft serve ice cream was layered with brownie chunks, caramel and chocolate sauce, then topped with whipped cream and fresh strawberries. The coffee soft serve was so rich and flavorful. It packed a punch! The brownie chunks had a deep and dark chocolate flavor that paired really well with the coffee and caramel sauce. This parfait blew away my expectations. Oh how I wish you could order this any old time!

I would say lunch at Soda & Swine was a great experience. In addition to Liberty Station, Soda & Swine has a second and original location in North Park.