City Tacos is a Taquería located in San Diego’s North Park neighborhood. I would describe City Tacos as true Mexican flavors and traditions with a touch of Southern California influences. 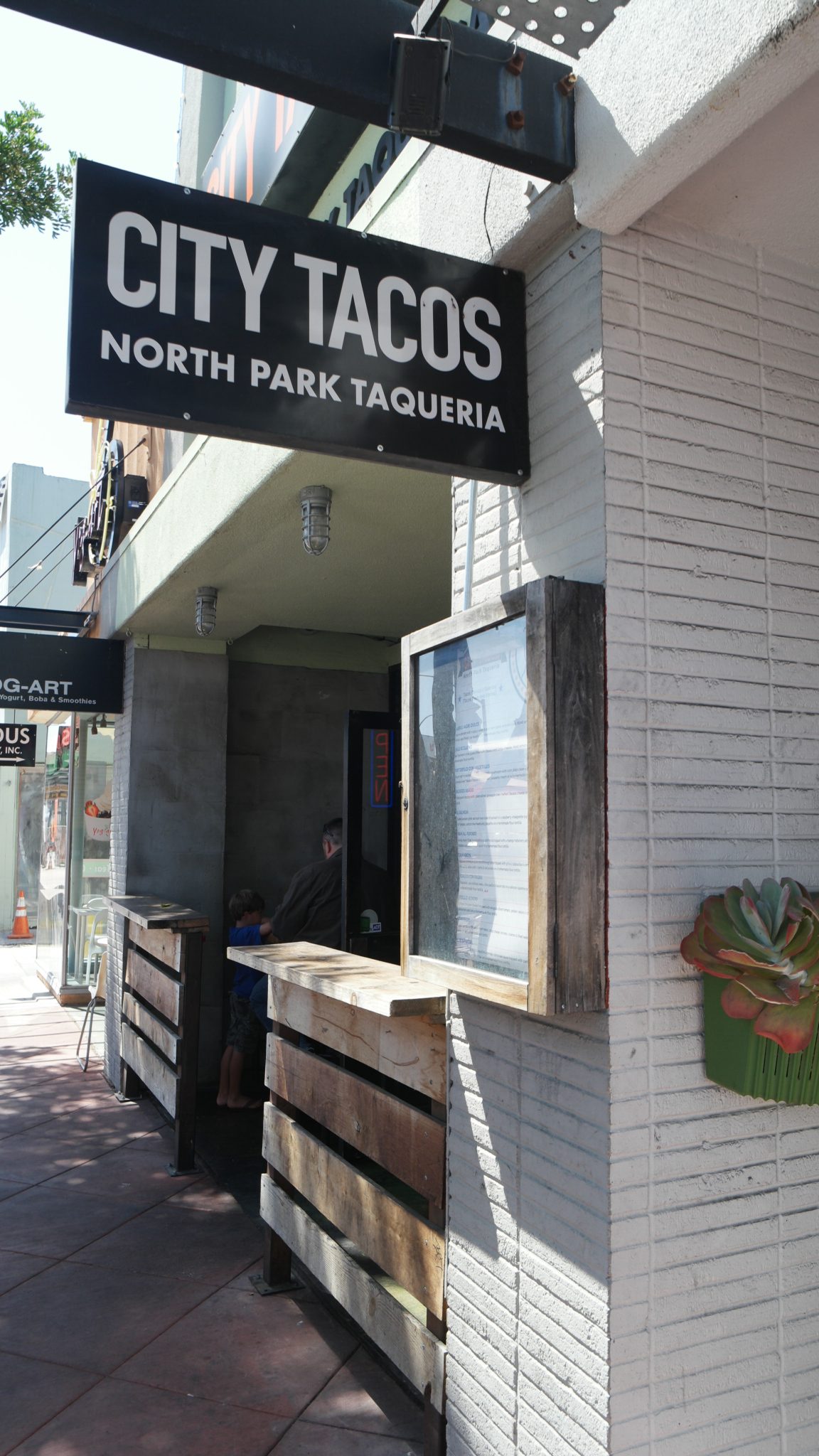 City Tacos offers an array of different tacos, such as chorizo, chili relleno, seafood, pollo & carne asada and much more.  They also have vegan options. This taco loving girl was completely content with their taco filled menu. However, my teenage son (for reasons I do not understand) does not like corn tortillas and was less than thrilled when we first arrived about the prospect of tacos for lunch until we saw City Tacos has flour tortillas in addition to corn tortillas so he was in. 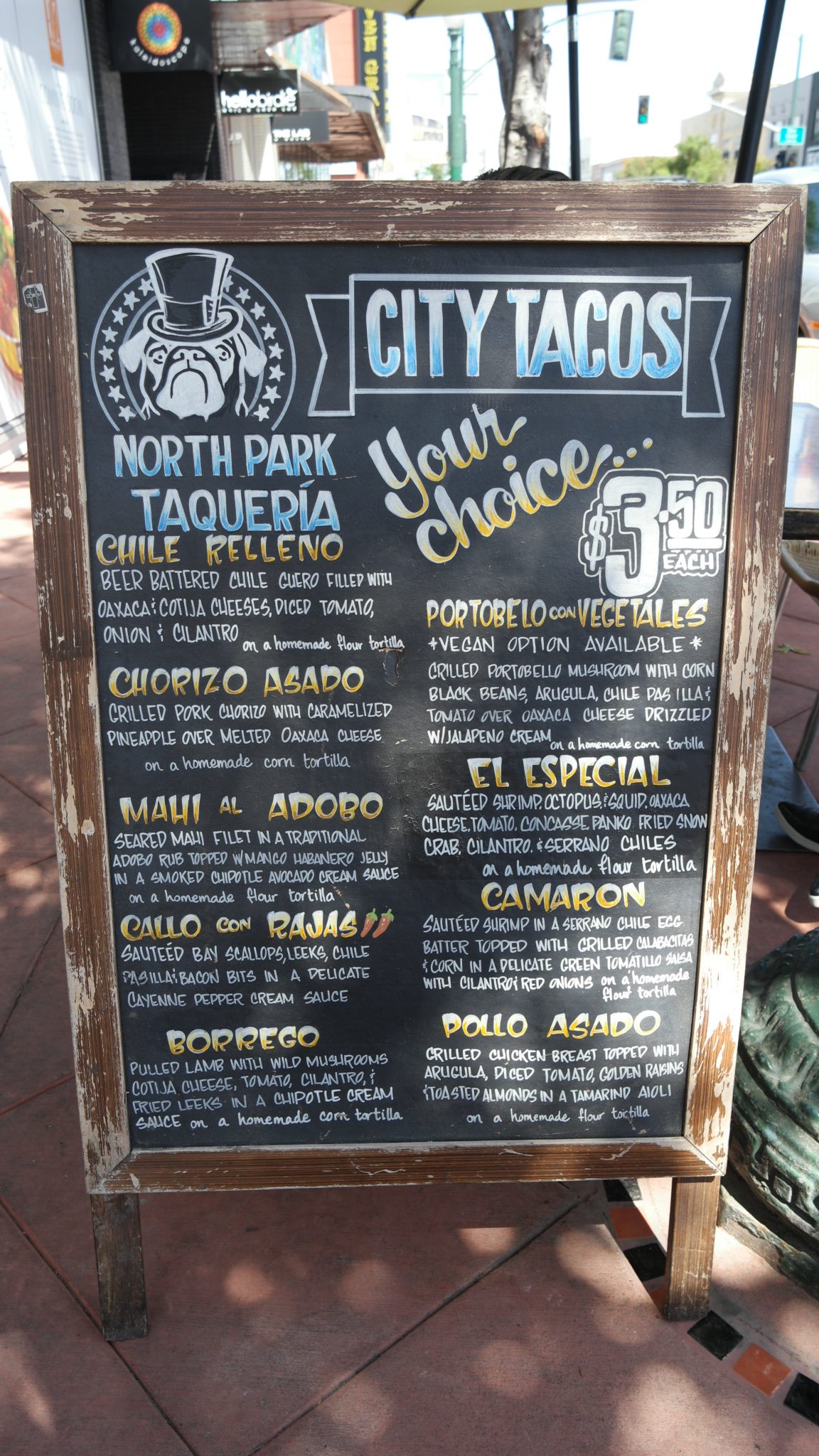 Upon arriving, I checked in on Yelp and saw that City Tacos has a check-in offer for a free Oaxaca cheese quesadilla, which I took advantage of. My husband and son each ordered carne asada tacos. The carna asada tacos came with melted Oaxaca cheese, pinto beans, carne, guacamole and pico de gallo. I had the hardest time ordering for myself because I wanted one of each taco on the menu! But I finally committed to three tacos and told myself I can come back at a later time for more tacos. For drink options, City Tacos had Mexican Coke, Jarritos, Agua Frescas (made daily), Negra Modelo in a bottle or on tap, in addition to other Mexican beers and sodas. After ordering, I hit up the salsa bar.

City Tacos has a lot of salsas to choose from, my favorites were roja and cilantro serrano cream. The Salsa Bar menu stated they have chips, but they did not actually have any chips. Kind of a bummer because I love chips & salsa alongside tacos. Also at the salsa bar were onions, cilantro, lime wedges, jalapeños, cucumbers, jicama and Tajin. 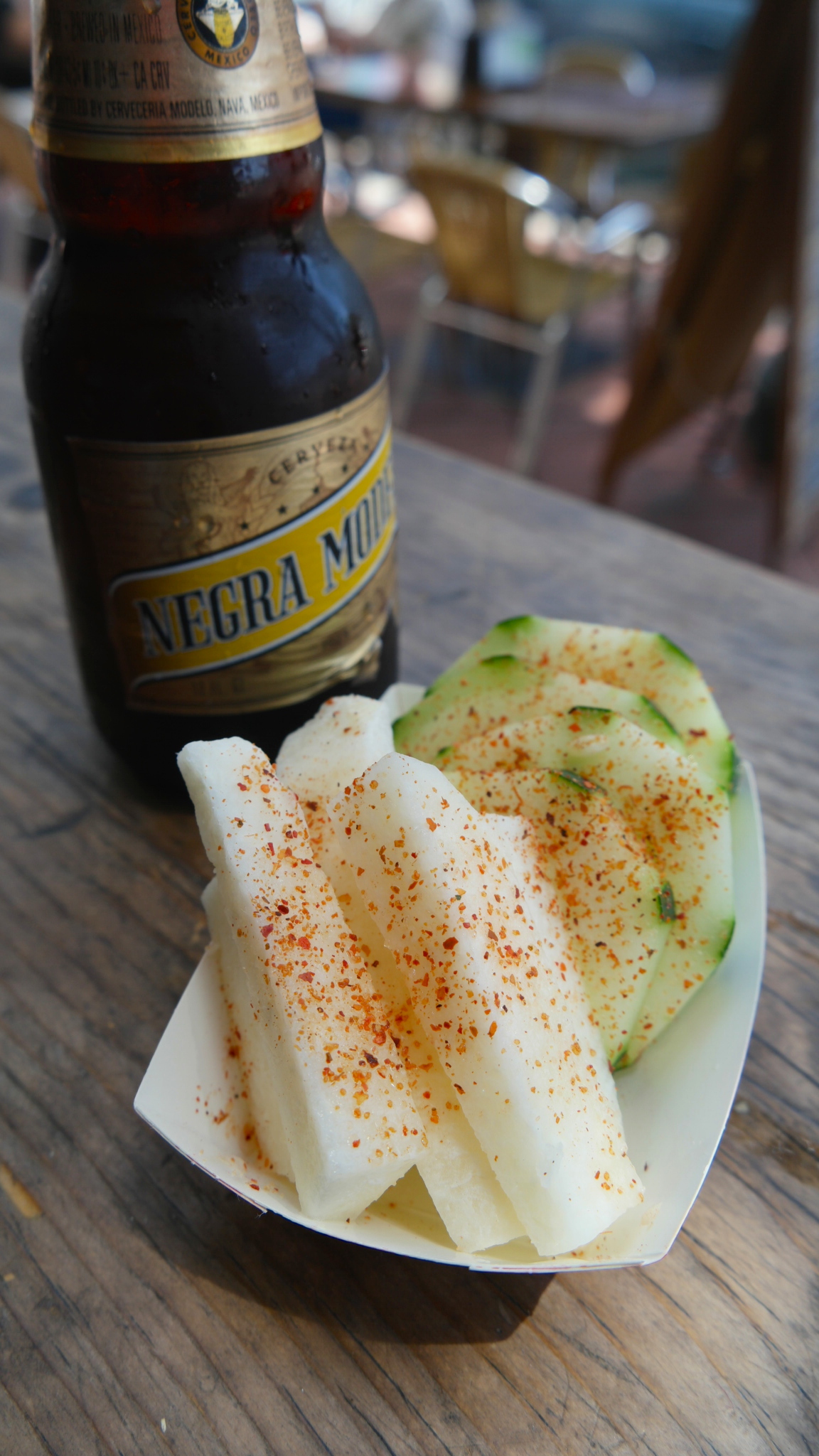 Jicama & Cucumbers with a squeeze of lime juice and Tajin

What a nice refreshing precursor to tacos! It didn’t take too long until our tacos arrived and we dug in. For my lunch I ordered Camaron, Chili Relleno and Chorizo Asado tacos. Check out these good looking tacos… 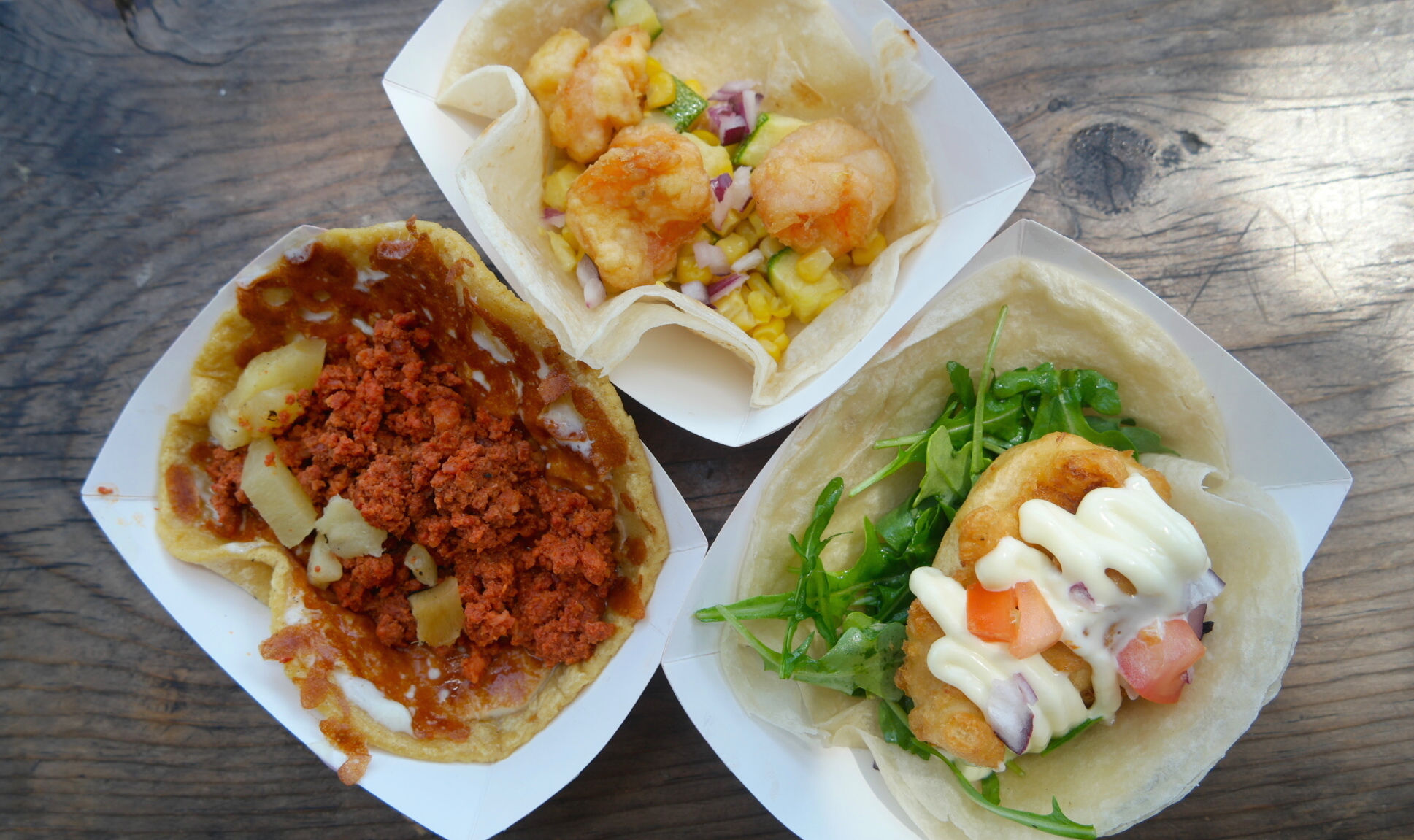 Before I dish on the flavors, I didn’t read the menu close enough when I ordered because I did not realize two of my tacos were served on a flour tortilla otherwise I would have asked for corn instead, but the flour worked well with the taco fillings. It is just my own preference. 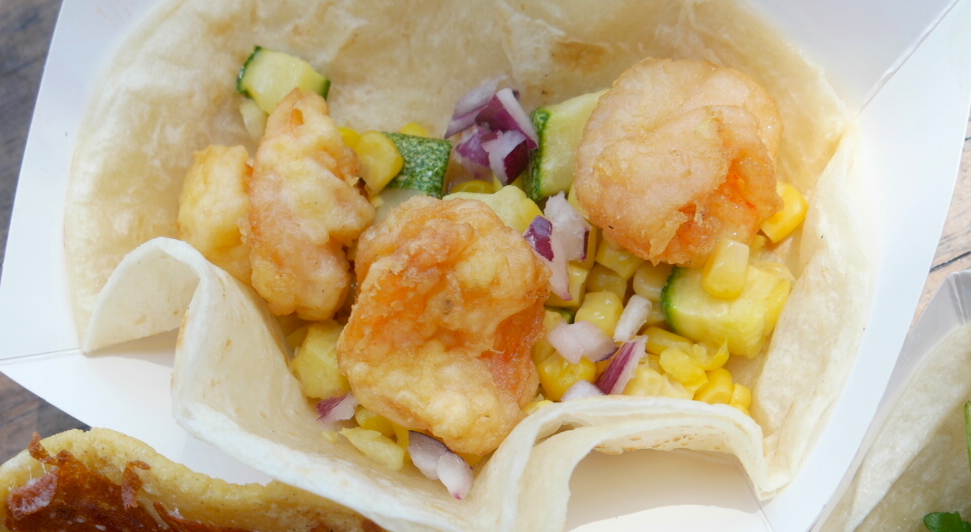 Now let’s talk tacos, the Camaron taco has sauteed shrimp in a Serrano Chile egg batter topped with grilled calabacitas, corn and red onions on a house-made flour tortilla. The taco also comes with green tomatillo salsa and cilantro, but I am not a cilantro fan so I asked for them to be omitted from my taco. The shrimp had a very light batter, which was just right because it really allowed the flavor of the sautéed shrimp to come through. I enjoyed the grilled vegetables, they added a nice texture to the taco. My only wish was that I had ordered it on a corn tortilla. 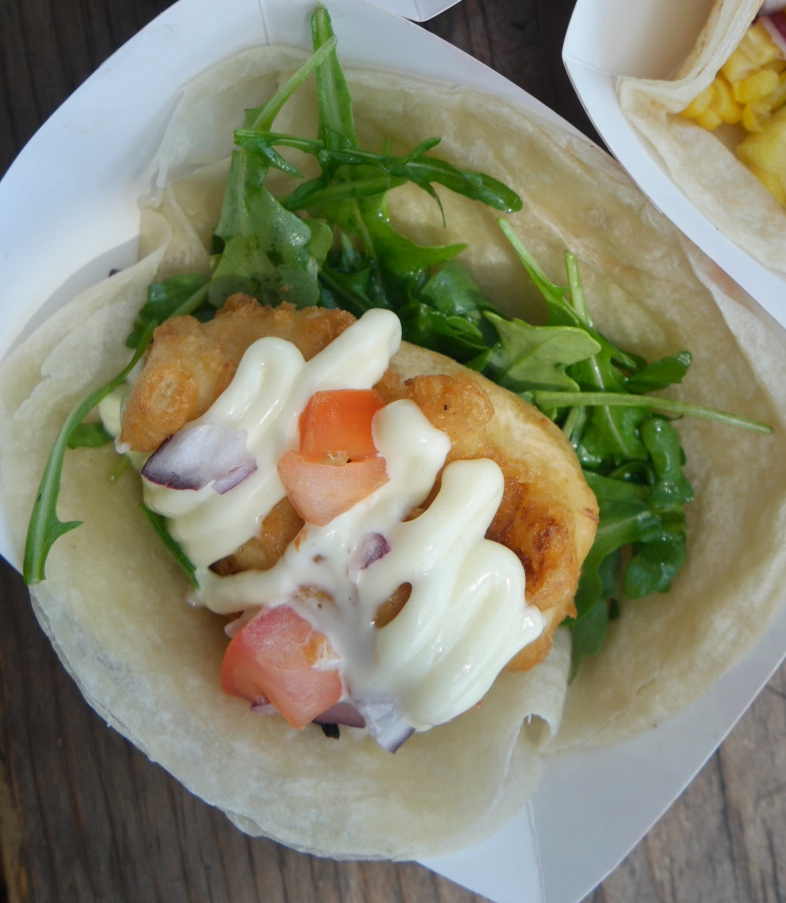 The Chili Relleno taco has a beer battered chile guero filled with Oaxaca and Cotija cheeses, served on top of a small bed of arugula, topped with mayonnaise, diced tomato, onion and cilantro (no cilantro for me, please) on a house-made flour tortilla. LOVE! The chili relleno had a perfect crisp to it and not at all soggy considering it was on a bed of arugula and topped with more vegetables that could potentially cause the beer batter to get wet. The cheese combination was fantastic and had a pleasant chewy texture! I was a tiny bit spooked at first by the mayo on top of the chili relleno, but it really work with all of the taco components. Much like the camaron, I would have preferred my taco on a corn tortilla. 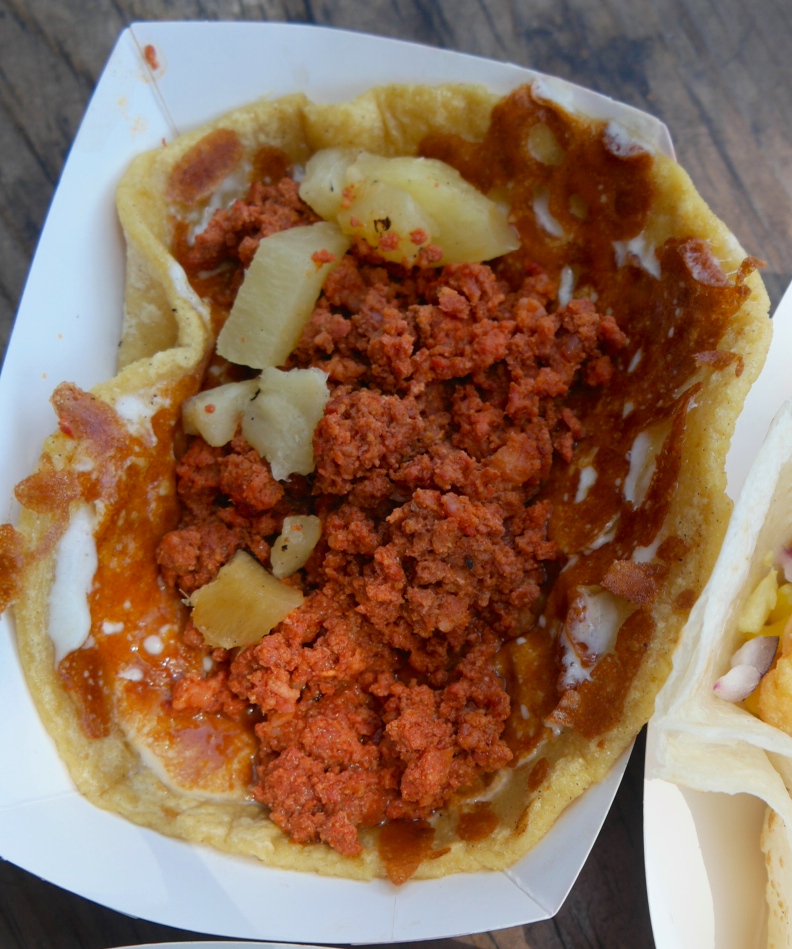 The Chorizo Asado taco has Grilled pork chorizo with caramelized pineapple over melted Oaxaca cheese on a house-made corn tortilla. It was overflowing with chorizo and the caramelized pineapple added a perfect sweet touch to cut down on some of the heat from the chorizo. And the cheese, oh the cheese! I appreciate City Tacos use of Oaxaca cheese. If you haven’t had Oaxaca cheese before it is similar to mozzarella cheese with a bit more of a salty kick. City Tacos melts the Oaxaca cheese on the cook top to give it a brown crispy crust, then it is placed on the corn tortilla before topped with its ingredients. I don’t think I will go to City Tacos without ordering the Chorizo Asado taco. This taco is a must!

Our complimentary quesadilla, thanks to the Yelp check-in, was super good as well. You can also order it if you have already used the check-in deal, it just is not listed on their menu from what I saw. It is your basic corn quesdilla, only much more than basic because it is made with City Tacos house-made corn tortillas and Oaxaca cheese. City Tacos corn tortillas are so fresh and have a perfect thickness to them that they don’t fall apart from taco fillings. I would have loved to take a dozen home with me! I was also impressed with their flour tortillas and how they held up as a taco and didn’t fall apart like some tacos out there do.

I am looking forward to our next meal at City Tacos and sampling more of the taco menu.